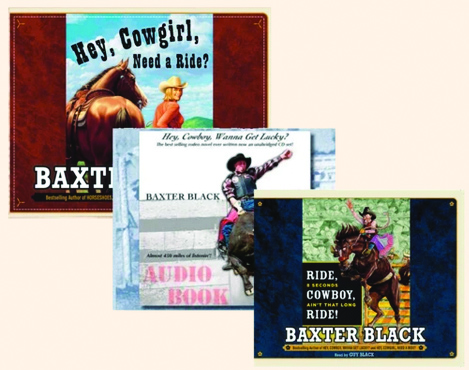 One moment please—while I rave about Baxter Black’s Audiobooks. Over three decades ago, in our younger days (pre-digitization), before he amazed audiences on Johnny Carson’s TV show (1991), I was drawn to this master humorist, a cowboy-musician-veterinarian, now genius loci of Benson, Arizona. His naturally gifted creativity has astonished me ever since. Over the years I have fancied myself his makeshift, amateur amanuensis by favorably reviewing his uproarious works in print. Now comes his Audio Rodeo series. It’s great!

D.V.M., Doctor of Philosophic Amusement, poet, novelist, musical mystagog, radio commentator, television luminary, inspirational speaker—name the gig, he’s done it. In person, cinematically, or beaming from space, he uplifts anything that’s heavy and makes it funnier. He could carve a laugh out of a fence post. Baxter has that rare but gleeful absence of specialization that allows engagement in ventures which demonstrate profound skills in all sorts of pleasing diversions. His 3-Rodeo Audiobook Collection is a prime example. The print novels are now ear pieces; Baxter Black is your EarBuddy.

Un momento por favor—awhile back I talked with him, in Spanish! He lives about 40 miles north of the Mexican border. His voice blew back through the phone like a cool breeze. While he was politely correcting my coarse and stumbling language slurs — he’s a dandy multi-linguist — Baxter reminded me that “People want to see humorists do more to help the world in its difficulties.”

I’m certain that a basis of his philosophic grasp of humor is: Smut sells, but it doesn’t satisfy. Counterfeit entertainment consumers are already fed up to their ears with Smut. Instead, Baxter knows that good humor is the pure remedy for constantly disturbing, frantic anger and depravity: laughter satisfies. Smut bad; Laughs good. His artistry shuns strychnine entertainment & restores an appreciation for comedy, thereby resuscitating the darkly malcontented. These audios are hopeful, delightful, uni-sensual, upright entertainment. How many people don’t read, won’t read, can’t read? You may know someone, likewise. Audio novels are ingenious endeavors cherished by those unable for some reason, to read. Although it is a shame to lose sight of the drawings by Baxter’s stable of artful print illustrators, hearing the nuanced narrative accents enjoyment of the sound of the language, making up for that loss. His reading of the first two books channels an extra sensual tonality to the novels, and what could be better than being read to by the creator? His son Guy’s venture of “Ride, Cowboy, Ride” (coached by Dad) is inspired.

Avid fans remember that “Ride, Cowboy, Ride” is a broad spoof on the original sport theater of the American west: Rodeo. The story line evolves sequentially over a year of traveling events culminating at the National Finals Rodeo in Las Vegas. Beginning audio tenor is set by hearing Baxter recite “The Hell Creek Bar” piece, as only its writer could. Guy Black then takes up the storytelling. Their Audiobook closes just like in print with “The Real End,” then Baxter himself reads out the last poem, “Pistol-Packin’ Pawn Shop Pinup Girl” to perfection. Throughout, Baxter guides and cheers on the recital of an eclectic mixture of stunts, gags, inadvertent faux pas, and innuendo sparked by characters prone to failures of cognition. “Ride, Cowboy, Ride” contains no mockery, bigotry, Gimcrackery, or downers for spasmodic smut hungry addicts (excuse the vivid phrasing). As I reviewed it in print years ago: “It just makes you pause in disbelief and then burst out laughing…”  Guy’s especially talented rendition inflects the excitement and action exactly as Baxter must have intended it. Remember how extraordinary it was to be read to? If you’ve read these novels—or have not—it will be fun to recapture the feeling by taking a listen: experience more merriment. Moreover, replant the Baxterian mystique by giving the 3-Rodeo Audiobook Collection to another fan or, better yet, give a listen to someone with reading difficulties.

West Nile Virus and Your Horse