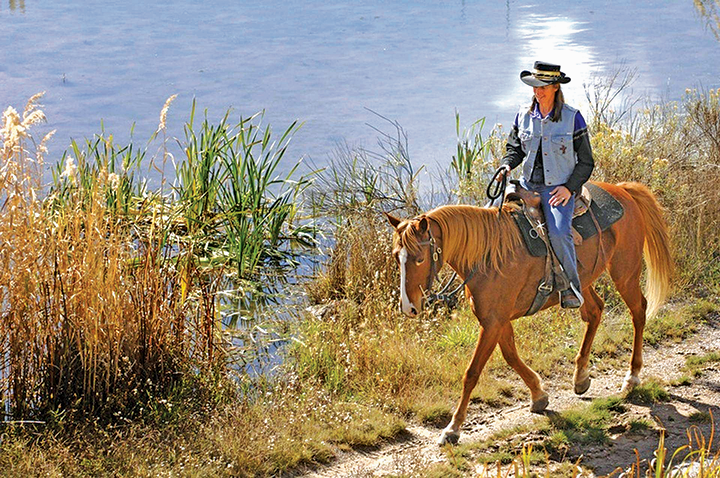 Spring is here and with it the certainty that winter is behind us. If you are like me, you have caught the horse riding bug and every sunny day calls you out to connect with your furry friend. This month I would like to talk with you about the importance of the conditioned response method of training our horses. I had heard the term for years before I really understood what it meant. I believe it is important to understand “conditioned response”, for it is foundational to truly training your horse at any level. The measure of any training method is how well it works to change the horse’s reactions from its natural response to a conditioned response without provoking unwanted behavior.

But, what is a conditioned response? It is the response to a cue that has been practiced so many times that the response replaces the natural reaction. One such example in human terms is the simple hand-shake. When someone I don’t know introduces himself to me, he usually walks up, tells me his name while extending his hand in greeting. I, in turn, extend my hand, grasp his and give it a welcoming shake. I do not have to think about it, it just happens as a normal response to the extended hand. This would be considered a conditioned response.

Why? Because I was not born knowing how to properly greet someone with a handshake. It was not part of the original instinct. There was a learning process in which I was taught what the extended hand meant and how to respond to it. If I had not been taught, I might be asking myself what he wants. Is he looking for money? Is he hurt and wants me to see his wound? Is he going to grab me and hurt me? If the extended hand was only occasionally used in greeting, the response would have to be a lot more thought out. But because it is such a standard greeting, it leads to a conditioned response that is so automatic, it happens without thinking about it.

So, how does this relate to horses? Horses are wired to respond or react by instinct. They do not think first and then react. If something startles them, they instinctively bolt and run. If we are not riding or working with them, no harm, no foul. But, if we are on their backs, trying to enjoy a trail ride or walking beside them on the way to do some grooming, we are in great danger of getting hurt. So I want to take the time to teach my horse a different way of responding to its fear so it becomes less reactive and I can be safer when I am working around it.

So let me teach you how to apply the conditioned response method. Our next step in the sequence I have been working on is putting the bridle on the horse. Let’s start there. Whenever I work with a horse, I start first with the head. The way a horse lets me handle its head will tell me how it will feel about me handling its body. A horse that is afraid or resistant to my lessons will hold its head high, whereas a horse that is trusting will allow me to lower its head without resistance. So the first thing I want to teach my horse before trying to bridle it would be to drop its head on cue.

I will begin with a halter and lead on the horse. Have the horse in a somewhat enclosed pen so you do not have to worry about the horse getting away from you. The round pen is perfect as you can work the horse back to you if it does pull away using the previous lessons. Take hold of the lead just below the snap and pull towards the ground. Put only about 5 to 10 pounds of pressure on the lead. Put only the amount of pressure that you feel you could maintain for a length of time. Then wait. You are waiting for the horse to drop its head just a fraction and then release as quickly as you can. Pet and praise him and do it again.

Don’t be surprised if the horse doesn’t respond correctly right away. Many horses have been taught to endure or even resist the pressure of the halter by many repetitions of being released while resisting, not giving. They may just ignore the pressure at first. Don’t release, just wait. They may lift their head higher to try to make you turn loose. They may even rear in which case you want to make sure you have a long enough lead that you do not loose pressure on the halter. Whatever their reaction to the pressure, just match the pressure and wait. As soon as they drop their head some, even if it is still higher than when you started, release and praise them. It is still considered a give in the right direction.

There is a difference between a give to the pressure and a passive allowance of letting you pull their head to the ground. If they are just being passive, the head will go down slowly but you will still feel some pressure on the lead. Try to stabilize your hand at a certain point so you can feel the slack drop into the rope as the horse gives to the pressure. It is hard to explain the feeling but you will know it when it happens. This is important because the give is an active participation in the exercise whereas the other is just a passive submission because nothing else is more important at the moment. When something else is going on, you will not be able to drop the horse’s head on command and gain the control you thought you had.

At first, when I am teaching the horse to drop its head, I will allow it to raise its head every time I release. But, as the horse better understands the cue, I will allow less time between requests to lower his head until he learns to keep his head at a certain level all the time. With a horse that is sure its head has to be high, it can look like his head is on a yoyo string. I cue it to drop its head, release on the give, it raises its head and immediately I cue it to drop again. This can go on for several times until it keeps its head down for a few seconds before raising it again.

How does this relate to the conditioned response definition? Horses, by nature, want to keep their heads free and up if they are uncertain about anything. Having their heads caught and controlled is almost certain death in their “natural” thinking. If I condition my horse to drop its head on cue no matter what else is going on at the time, I can calm the horse down and know that it trusts me to lead. When you drop the head, you drop the emotions. A high headed horse is tense and “on the muscle”. To drop the head, it has to relax some muscles even if only for a moment. I want to use this cue so much that whenever the horse starts to get worried, all I have to do is reach for the halter and he will drop his head and relax.

I will teach this lesson first with the pressure from the halter. Then I will improve it by doing it several different ways such as with my hand on the top of his head or when pulling on either side of the halter or straight down with the bridle reins or with the individual reins. I want any downward pressure to mean drop the head. It is also important to take your horse to different spots and practice because the change of locations will change the horse’s focus and emotions. Start in a comfortable place for the horse and take it farther away from that place or add more commotion as it gets better until you are certain the response will be there when you ask.

Let me say that this lesson does not have to be perfect before you go on but be consistent whenever you do work with your horse. Don’t skip it because you have something else you would rather be doing. “It never doesn’t matter to the horse.” It does not take much for your horse to learn that it is the expected response whenever you are around and it will change the way he relates to you big time. Until next time…..Be safe and God Bless…….Ann Kirk
For more information on Ann Kirk and her Sensible Horsemanship Programs, go to www.annkirk.com. And check out the Sensible Horsemanship DVDs now available! You can also sign up for the Sensible Horsemanship Spring Tune-up Clinic coming up April 17, 2021 at Story Book Farms.

Sensible Round Penning – “Eyes on Me”