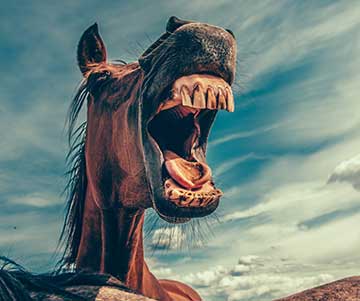 By Baxter Black, DVM
Some people are just flat good at handlin’ horses. They’ve got that good “horse savvy.” Matter of fact, there are people actually makin’ a livin’ trainin’ horses! I admire these folks’ ability and special talent. It’s always a pleasure to see a good horse workin’ right. But horses look at veterinarians like kids look at Sunday School or cowboys look at weddings.

They make’m uncomfortable. Even though everybody tells ‘em it’s for their own good, they’d lots rather be someplace else. But, in the case of the horse, you can’t really blame them. Most every time I have to handle a horse it’s to stick something in him like a tube or a shot or a plastic sleeve!

And, they remember you! I’ve seen horses go bug-eyed and snorty at the sight or smell of a vet truck! The only way you could give’m a shot was to sneak it to the cowboy and let him do it from horseback.

Years back I went to a lecture and demonstration on “horse psychology for vets.” The gist of the whole philosophy says it is a matter of wills. Since the horse is a social animal, each band has a pecking order. It’s not always the strongest or fastest or biggest that’s the leader. It’s the one with the most dominant personality. So every time a person meets a horse one has to dominate the other.

Well, I took the schoolin’ seriously and came back ready to test my new horse psychology skills. I practiced on several “bronky” ones before I tried it out on my archenemy. He was a dark brown, non-descript, bad-headed, ill-tempered, big-footed, long-haired typical Nevada-raised feedlot slogger named Scrap Iron! In six years I had never tube-wormed Scrap Iron or given him so much as a vitamin shot! He wouldn’t let me within 20 foot of him!

Following my instructions, I crouched real low and approached him. He mistook me for the farrier and let me pick up a front foot. I buckled on the one-leg hobble and stood up. He realized immediately the trick I pulled on him and promptly went into his “bad actor” routine. He ran around the corral on three legs, he reared, rolled, snorted, slobbered, kicked, fell, cussed and generally just made a fool of himself. Which, of course, was the plan.

After soakin’ him like this for twenty minutes, I went over and humiliated him in every way I could think of. I tickled his flank, handled his tail, patted his belly, stuck my fingers in his mouth, nose and ears. He stood and took it, glaring at me. Then I took off the hobble and repeated the tickling, handling, patting and poking while he stood there shaking and hating me. But he did stand.

I tubed him two or three times and gave him his first full series of vaccinations without a twitch, a foot up or an ear. The only restraint was a halter, my voice and his knowledge that when it was him against me, it was ME in charge. It took forty-five minutes and was the pinnacle of my horsedom.

He never forgot and the times I worked on him over the years he allowed it. It was a good arrangement, I got him vetted and he still hated me.

For those of you who think this little experience swelled my head, some of you’ll be pleased to know that the last time I wormed Scrap Iron, I turned my back on him and he bit me on the shoulder. I whirled around and he had this innocent look on his face. I stared at him. He smiled just a little and seemed to say. “I’m just keepin’ you on your toes, kid, so you don’t get too cocky. It’s for your own good!”
www.baxterblack.com