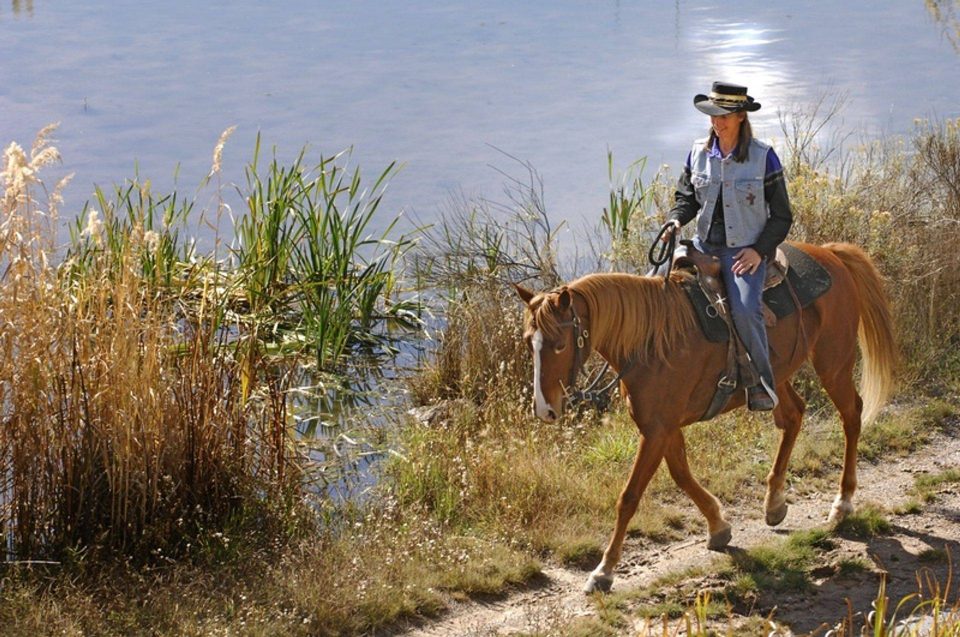 I would like to continue where we left off with the round-pen lesson. It should be noted that this lesson as taught is for the mature horse, 2 years and up. The younger horse needs a modified lesson to prevent physical injury. We had taught the inside and the outside turns and were practicing by mixing them up to improve the horse’s attention to your cue. If the horse turns before you ask, turn him back and continue on. He must wait for your permission to change directions. Don’t be too concerned if the horse starts off fairly emotional. As he gains understanding of the “yes” answer, he will get calmer and start focusing on finding the release instead of just reacting to the stimulus. You may stop the lesson at any time because the whole session is really only a series of mini lessons, each ending in a release.

If you are getting the start of the turn, either inside or outside, but then the horse continues the way he was going when you try to return to your driving position, you are probably cutting him off. As soon as he starts to make the turn, you must think of circling around behind him which means you cannot just walk a straight line back to the center. By making sure you circle back into position, it will become clearer to your horse that you want him to complete the turn and go the other direction.

It is important to not let the horse just go around and around. We want to exercise the mind, not just the body. Hold the lariat as long as possible when cueing. The more you use your tool, the more desensitized your horse will become and the less effective it will be. You need to become observant, to learn to see what is coming next, not just notice it when it happens. Know ahead of each cue what it is you are looking for. Then you will ask with more clarity and the horse’s response will be quicker. If you give a cue and the horse does not respond to that cue, then you have not taught the cue well enough. Don’t blame it on distractions or whatever. Just focus on being consistent and it will happen. If the horse acts bored and is not responding to you, increase the speed or the intensity of the cue to get a better response.

The next step is to get the horse to stop and face you. This can be done from the inside turn by quitting all action just as the horse begins to make the turn. It will usually take several tries but most horses will learn it fairly fast unless they are nervous or afraid of human contact.

A more solid approach is from the outside turn because each time he turns, he has to stop for a moment. Get the horse to stop by doing outside turns repeatedly, one right after the other until the horse stops. He may have his nose over the fence and his tail in your face but it’s a place to start. Let him stand for about a minute. If he chooses to move, keep turning him to the outside until he understands that it is okay for him to stop moving. Then ask him to step forward a few steps and stop, using the outside turn if he tries to leave. Continue until he will stand parallel to the fence with his head inside the rails and facing left.

The easiest place to begin teaching the horse to keep his eyes on you is from directly in front. Move out in front of the horse at a comfortable distance. Cue the horse to look at you with both eyes. I like an audible cue because the horse does not have to guess whether or not you are cueing him. Your cue can be anything as long as it is consistent. I use the “kissing” sound. When the horse takes its head away, ask for it back by “kissing”. If he moves his body, quickly reposition him again and start over.

Looking at you is a forward motion exercise, so don’t let the horse back up. If he does, ask him to move forward a couple steps and stop. Then reposition yourself in front, perhaps at a greater distance, and start again. If the horse does not respond within 2 or 3 seconds, continue your “kiss” while stepping to the side and moving your rope. If his attention comes to you when you move, stop cueing, praise him and walk away to give him a big release. Again, if he moves off, move him around the pen and reposition him.

If he ignores your cue, continue “kissing”, but take your eyes off him, circle around behind and move him forward a short distance. Reposition him, using the outside turns if necessary and try again. Once you start your “kissing” cue, don’t stop until you get the movement you want. If it is only his 2 eyes on you, stop cueing when you get it. But if he won’t look at you, you must keep “kissing” while adding moving the rope, stomping your feet, waving your arms until he either gives you his head by looking at you or moves off. He has to move something or you will just desensitize him to your audible cue.

As the horse catches his breath, (remember, he was working on inside/outside turns), he may become less responsive for his motivation to stand still will decrease. If this happens, send him off at a trot and practice 20-30 turns. Don’t think of it as punishment but as using his desire to move as an opportunity to get your turns more solid. Then stop him and try again. This is usually enough to motivate him to try harder to understand what part of his body you are asking him to move. He will soon learn that all you are asking for is his attention to stay with you.

When you have his attention from in front, begin stepping off to the side, keeping both eyes on you. Work around until you are near the horse’s side (still at a distance) while he is looking at you with both eyes. Now wait. As you continue to ask the horse to keep his eyes on you, the muscles in the neck will get tired and the horse will eventually move its body to line up with its head to relieve the ache. This may take a few mistakes but it will happen if you don’t give up. Then you practice by stepping to the side and asking the horse to face you until he will turn a complete circle to keep his eyes on you. You can then release him, move him back to the left, reposition him and repeat the process.

When you have one side well, go to the other side. You may have to position the horse along the fence and go through the steps all over again. You have to train each side separately and then put them together. Now walk away and reposition yourself at a 90 degree angle and have him turn to face you. If he only gives you his head, just wait until he squares up and walk away again. Keep alternating sides to condition the response from both sides. If he moves off at any time, push him a little, stop him, get him to face you and start over. Don’t just chase him around or he will think that is what you want him to do and he will get worse instead of better about staying with you.

There is so much detail that goes into these lessons and I have only given you the skeletons. Again, I remind you to be patient and enjoy the journey! Take care.

Sacking Out Part 1 – The First Touch