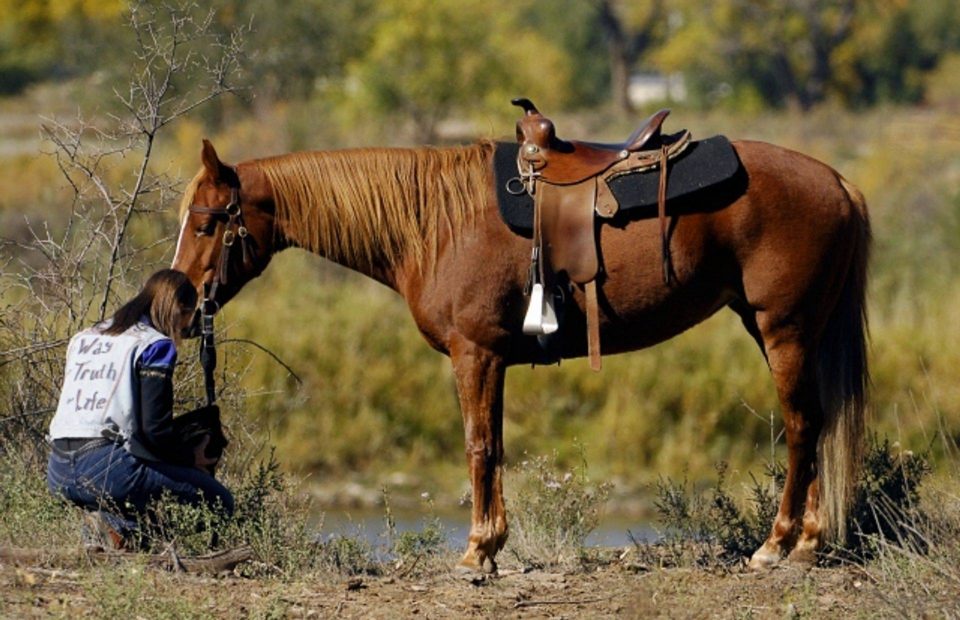 Happy New Year! I pray you had a good holiday season. 2019 is now upon us. Lord, help us to seek what you have for us and to rejoice in each day.

Did you practice with your motivating tool during the past few months? Are you getting “good” at throwing the rope with both hands and hitting your target on the fence? And then getting it wound back up quickly to be ready for the next correction? Well, don’t worry if you aren’t there yet. I still have to stop and untwist my rope occasionally but I just see it as a good opportunity to rest. Being willing and persistent and having a good attitude goes a lot farther than having a “perfect” rope handling ability.

So, with all that said, let’s get started. Put your horse in the round pen and remove all equipment. If the horse is hard to halter, leave the halter on for the purpose of moving him to another pen when finished with this segment of the lesson. By the end of the next article, you should be able to easily halter your horse and won’t need to leave the halter on. By removing all equipment from the horse, it gives him more of a sense of freedom to move about as he chooses, making the results more dramatic.

The purpose of the Round Pen is to gain control of the horse mentally by controlling him physically without being attached in any visible form. To do this, you must find something that you can control and build upon it. You already know that you cannot control the horse’s ability to move. The strongest halter and the biggest tree cannot make a horse keep still if it really wants to move. It may not be going anywhere but it can still be moving its feet. Nor can you control his gait or speed. But you can decide that he has to move; that he cannot refuse to go when you cue and you can control when and how he turns when changing directions. So this is your starting point. “First, get the feet to move. Then get them to move consistently; then take them in the direction you want them to go”, (quote from John Lyons).

Start by sending the horse to the left around the pen. Why left? Because it is specific and being specific in your training let’s you “know” when you get the correct response. The gait of choice is a trot but if he chooses to lope, that is okay for now. He will slow down as the lesson progresses. If he tries to change directions, quickly turn him back to the left until he quits trying to turn on his own. This will be his first clue that you are controlling him even though you are not attached to him. At first, he will think he is running away and you have no control. But, he will soon catch on that you are telling him if and when to change directions.

When he is going consistently to the left, ask him to turn and go right. Keep him going right until he quits trying to turn back and then ask him to go left again. When he becomes consistent, only send the horse around 1-3 times before asking for a turn. You are not trying to tire him out. You are working on his submission to your control over his direction and movement. If he seems to be running wildly in a panic, do lots of turns, only letting him go half to three quarters of the way around before doing a turn. Practice this until the horse will stay going in a fairly calm manner and turn only when asked.

In some cases, your horse may be so comfortable with you that you cannot chase him off. This is okay. I will work most horses from the rail in to me. But there are some that I must work from in by me out to the rail then back. This is done by putting the halter and lead on and teaching them a “go forward” cue with a whip or a lead line. I teach them to yield their shoulder and to go forward when asked and then, when I remove the halter, I can cue them to leave and they will leave. Don’t get in a face-off with your horse. If the horse is not leaving because it is “safe” with you, you don’t want to loose that connection by teaching him you are not “safe”. If the horse will not move because he considers himself to be the dominate partner, you could get hurt by creating a power struggle. Also, if you don’t succeed, you have strengthened his position. So, break it down to a simpler step, teach him to leave in a clear controlled manner and then proceed with success.

Now, you can teach the inside turns. This is when the horse brings his nose towards the center of the pen as he is changing directions. At first, the horse will make an inside turn only because you will not let him make an outside turn. Eventually, he will associate your positioning with what kind of turn you want him to make. To cue an inside turn, you want to think of having a line attached to a halter. As the horse is going left, mentally cut the pen in thirds and walk towards the fence while watching the horse’s eyes, ears, head, etc. Imagine you are pulling his nose towards you as you cut him off. If he turns to the outside, immediately send him on left and ask again.

Be patient! This may take several times before the horse “tries” the inside turn as an alternative. He is searching for the release and he can only guess until he gets it right. You let him know he is right by releasing the pressure. When he realizes that he cannot turn away, he may just slow and stop. Get him moving and ask again. You must have the forward movement to get the turn. When he does make the correct turn, release the pressure and just barely keep him moving for 1-2 rounds. Do 5-10 inside turns from the left before working on the right. It will be easier on you and the horse to not try the inside turn from both directions right away. At this point, let the horse walk anytime he wants as long as he is responding immediately to your request to change directions. If he doesn’t, pick up the emotion by increasing his speed enough to make it count.

When you have both directions, do 20-30 repetitions before starting to teach the outside turn. Some people choose to never teach the outside turn. Times when I would not would be if I thought the horse might try to jump over the pen. This could result in injuries and would not be worth the risk. Also, if the horse has a habit of always running away from me, I would want to establish the inside turns firmly in his mind. In these cases, I would practice the inside turn 150-300 times just turning left and right, left and right. You will see some amazing results just from this one lesson if you will persist in the repetitions.

The outside turn is taught by pushing the nose away from you as you cut the horse off. Step more forward, raising your rope towards the nose. If it appears that the horse will run over you, let it past and ask again. If he makes the wrong turn, immediately turn the horse back, send him on and ask again. If the horse is very ingrained to do inside turns, you can usually get the outside turn by asking for the inside turn and then pushing his nose all the way through so he does a complete circle and continues in the same direction. When he begins to understand your cue, then do them without using the inside turn.

Well, I can go on and on as you can tell but it is getting too long. Go out and practice this much with your pal and we will continue on next time. If you have any questions, go to my website, e-mail me and I will help you troubleshoot. I am all about you succeeding with your horse so don’t hesitate to ask. Take care and be careful so the days ahead can be full of fun. God Bless you and keep you safe.

For more information on Ann Kirk and her Sensible Horsemanship Programs, go to www.annkirk.com. And check out the Sensible Round Penning DVD now available!

Has Anything Changed on the Vaccine Front?