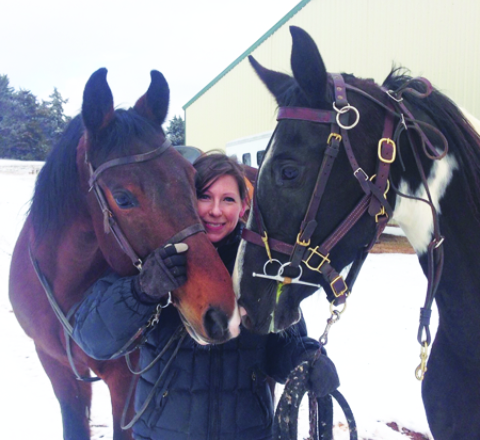 One of the most impactful myths of foal management is that a foal with worms will always look “wormy,” i.e. pot-bellied with a dull, shaggy hair coat and poor growth or weight loss. In fact, it has been demonstrated that healthy, shiny, robust foals can have very high parasite egg counts. Please do not depend on your foal’s appearance to determine your deworming protocol!

Foals require a slightly different approach to deworming than adults mainly due to their lack of immunity against intestinal parasites. Over the first few years of life, horses gradually build enough immunity to parasites to keep infestation to a dull roar (which still requires human intervention to prevent a higher incidence of parasite-associated disease). During their first year of life, however, foals are quite susceptible to heavy infestations of gastrointestinal parasites and their associated ill effects.

The two main genera of worms infecting foals are Parascaris species (aka round worms, ascarids – long, thick white worms as adults) and large and small strongyles (aka blood worms – small, thin red worms as adults). After ascarid larvae are ingested from the environment, they migrate through the intestinal wall and into blood vessels, eventually migrating through the liver and lungs. The larvae are then coughed up, swallowed and returned to the GI tract for maturation. Respiratory infections and inflammation can result from larval migration through the respiratory tract as larvae drag bacteria from the intestines and liver through sensitive lung tissue.
The most notorious effects of both ascarids and strongyles are gastrointestinal. Inflammation and damage to the lining of the intestines can result in the poor body condition seen in stereotypically “wormy” foals, but the pathology can have more devastating consequences. Migrating strongyle larvae can cause significant damage to the gastrointestinal vasculature, potentially preventing lack of blood flow to sections of intestine, ultimately resulting in bowel necrosis and severe colic. Ascarids are responsible for intestinal blockages, as adult worms can reach high numbers in the small intestine and tend to “ball up” and cause strong spasmodic intestinal activity. These worm impactions may require surgical correction, with a variable prognosis for survival. A little over 50% of foals survive to discharge post-surgery, but only 30% survive past one year. We suspect that this survival rate is due to the significant damage to the vasculature and intestinal walls, with high rates of adhesions and intestinal dysfunction occurring later.

To avoid these consequences, we recommend the following deworming protocol for foals:

The importance of deworming with fenbendazole for ascarids include minimal drug resistance, and most importantly, lack of paralytic effect on the worms prior to death. The clumps of paralyzed and dying worms seen after deworming with ivermectin can lead to intestinal blockage and colic. This effect has not been associated with fenbendazole. Deworming at more frequent intervals does not appear to have an advantage and can lead to resistance to a dewormer. As we do not have any new dewormers in development, preservation of drug efficacy is essential.

In addition to deworming, environmental management can help reduce parasite transmission. Try to maintain a “clean” pasture or dry lot for foals – one which has had few horses on it and has been regularly cleaned of manure. There is evidence that ascarid eggs are extremely hardy and can survive freezes as well as hot, dry conditions, so manure left from previous years can harbor a large and persistent ascarid population. Ideally, avoid commingling foals of different age groups. Peak ascarid egg shedding occurs in foals 4-5 months old and 6-8 months old. Housing older foals with ones a few months younger may expose the younger, more susceptible foals to higher worm populations.

Has Anything Changed on the Vaccine Front?