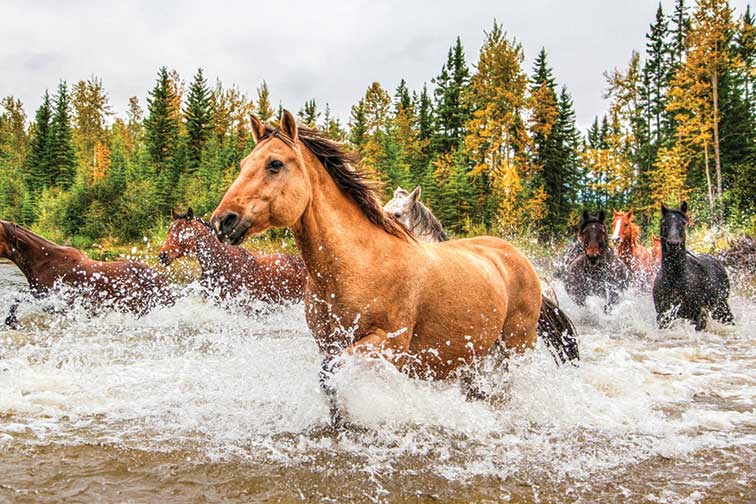 The furor of lawsuit threats, animal rights terrorists, gesticulating celebrity actors and ex-politicians traveling the countryside like Barnum and Bailey is finally bringing out those who really have something at stake in the Wild Horse/Domestic Horse slaughter issue. It is easy for a movie star or politician or animal rights advocate to fall under the trance that horses live forever and eventually go to horse heaven, because that is about as deep as they think. Their weak solutions to the abandoned horse problem that they have helped create are like ducks peeing on a forest fire.

I don’t wish to ridicule them. I appreciate their compassion, their concern of animals being mistreated, and their wish that horses wouldn’t die. But they live in a dream world. Buster, a life-long cowboy and horse trainer takes it personally when he sees pictures of starving, skeletal abandoned horses. He says, “There are a lot more humane ways for a horse to die than starvation.” The Wild Horse Wreck we have created by not allowing the BLM to cull the herds of wild horses and burros is as big a fiasco as the Forest Service’s misguided policy of banning timber and grazing in national and state forests. Oh, how we have to learn the hard way.

The American Indians have always held the horse in high esteem ever since Coronado crossed the border in 1535 and introduced them to us. The horse is revered, valued and used by them as chattel. But the Indians also take the responsibility of caring for the herd and the land. They are now trying to talk to people who live behind a desk about “nature’s balance.” The Navajo Nation in New Mexico, the biggest tribe in the United States, has now joined the National Congress of Indians and other tribes, in support of horse slaughter in the U.S., “We…can no longer support the estimated 75,000 feral horses that are drinking wells dry and causing ecological damage to the drought-stricken range,” they say. They aren’t kiddin’ and they know what they’re talking about. Studies of cost to feed and maintain one horse for a year in a rescue, feedlot, summer pasture, or refuge can be as low as $2,400 to $3,650. Using the lowest estimate, $200/mo. = $2,400/yr x 75,000 horses = $1,800,000.00.

Three of the entities actively involved in preventing the horse slaughter plant in New Mexico are ex-governor Bill Richardson, movie star Robert Redford, and the Humane Society of the U.S. I have listened to their speeches and read their quotes. I do not doubt they are sincere. I don’t question their emotional motives. However, I have yet to hear a viable solution for, not just New Mexico’s impending crisis, but for our whole country’s equine catastrophe that was the result of cessation of horse slaughter plants.

I would suggest that they put their money where their mouth is. Governor Richardson has had some legal problems due to shady politics, but I would guess he could come up with $250,000. Mr. Redford has an estimated net worth of $170 million, and the recent budgets of the HSUS spending runs about $250 million a year. They ante up together and make the first donation, $420 million. That will take care of the Navajos for 2 years.

Well, we all know they don’t intend to spend their own money, they don’t care that much. But the train is comin’ down the track and they are standin’ right between the rails and they better turn around and see it before it’s too late.