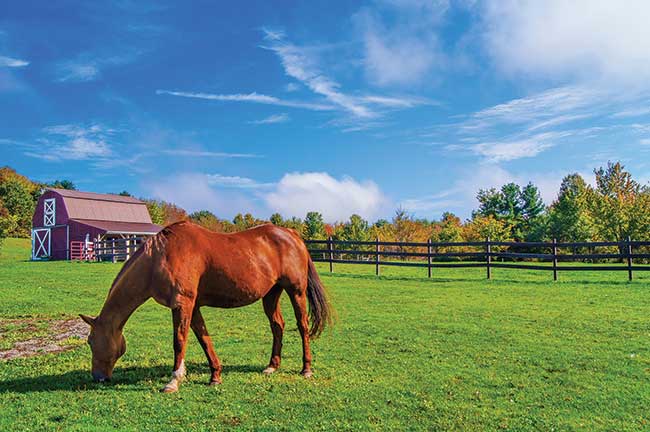 I closed down my computer and headed out the door for some face to face time with my stallions. I was musing to myself how interesting life is when you have a talking horse. “Friends” on the computer are nice but there’s just nothing like real time conversing with a stallion.

Uh oh, my blue-eyed Quarter Horse stallion, Commander (the one who talks) was over by the barn and deep in conversation with my Arab stallion, Timer (the one who probably can talk but so far hasn’t graced me with a word). Usually in this breeding time of year the two of them are trading stallion insults over the fence as to who breeds mares with the greatest aplomb.

Right now they were obviously and very quietly discussing something else. This always means trouble!

“Hi guys, it’s nice to see you playing so well together,” I ventured as I surveyed the pile of interesting objects that they had amassed in the space between their pastures.

Commander raised his blue eyes to meet my blue eyes and gave me the dumb-blonde-you-don’t understand-look as he haughtily said, “We just happen to be building a major new Internet program for horses. It will be the next big thing!”

You know, they never cease to amaze me. Who would have thought that horses even knew anything about computers, let alone the Internet!

“The horse world has watched with interest as humans spend more and more time on Facebook,” Commander said as his equine-entrepreneurial spirit kicked in. “Timer and I have decided that it’s time for horses to have their day communicating on the Internet and making friends! Just think of all the mares that might want to contact me!”

I’m starting to get the picture, as unbelievable as it may sound. There are strange things that happen in this world. Maybe there was alien equine intelligence that erected the pyramids in Egypt, created Machu Picchu, built the Great Wall in China and made Roy Rogers and Trigger a star…

“We are in the process of creating the first horse “friend” site ever done. An equine Facebook!“ Commander continued with a far away look in his blue eyes. “It will be called TAIL BOOK!!”

I dropped back to earth pretty quick on that one. “What! How can you possibly do that?!”

“There are more women on Facebook than men and mares will jump at the chance to be the first in their pasture on Tail Book.” Commander stated. “Do you know that there are 9.2 million horses in the United States alone? And many are mares!”

He did have his facts right. I don’t know how he knows but there are over 166 million people on Facebook in the US and 56% of them are women. On social networking sites, women rack up an astonishing 99 million more visits per month than men! Even more amazing, women make up 55% of the online gaming population.

“So just how are you going to accomplish this new computer site task?” I ventured to ask, hoping that they indeed hadn’t really found some “adventure-capitalist” who would invest in this. Venture capital people seem to throw money at some of the wildest ideas!

“Well, we have been gathering the parts for the base computer unit.” Commander proudly said. “Here’s our screen and mouse.” He pointed to an old screen off the barn window just as a jaunty little mouse stepped out from behind it and offered me a high five.

I do have my limits and high five-ing a mouse is too much! So just how do you tell an over enthused stallion that his computer knowledge is a little off base?!

“We have memory covered too” Commander continued undaunted. “We’re bringing the donkey in on that, he’s got a mega-bite!”

“Just why did you name it Tail Book?” I literally couldn’t think of anything else to say.

“People tell tales on Facebook, they don’t tell “faces”! It was completely misnamed.” Commander said. “Tail Book will be where tales are told! And when I give my come-to-me-chickadee stallion call, all the mares on Tail Book will raise their…..”

“Commander! Stop, that’s too much information!”

“I’ll spend all day on Tail Book talking to mares. I want to be sure I have more posts and mare friends than Timer!” Commander snorted.

I saw my opening! “Well I guess since you’ll be all tied up making snorting posts on Tail Book all day, Timer will have to actually breed the mares.”

Timer gave a yee haw whinny and Commander yelled over the fence, “You don’t breed as well as I do!”

Back came a derogatory horse comment followed by an even worse snorted remark from Commander dealing with Timer’s heritage. Oh my, the manure was really flying now!

I smiled and turned away, things were back to normal.

The Birds & The Bees, The Mares & The Trees