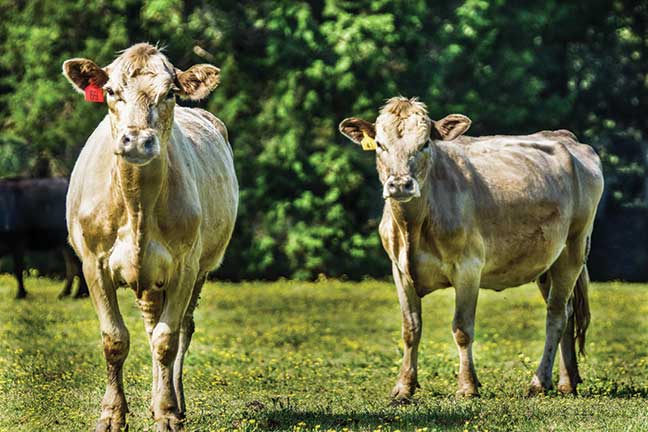 I can always count on my friends to add a new page to my scrapbook entitled “How to Mess up a Simple Calving.” This chapter would be entitled “Halter Safety.”

Rob was deep into calving his heifers. His calving lot was football field size including a small shed and a couple jugs. It was decorated with swells and depressions common to the Coulee ranchland in eastern Washington.

For his regular heifer checks he used a typical “rancher’s” 4-wheeler that he’d bought from an orchard man who had traded up in a good year. Ron paid him $50 plus two grandstand tickets to the Mariner/Cleveland Indians baseball game. It was dipping into twilight when Rob made his “just before supper” heifer check. He was looking for #112, a brockle-faced heifer that he’d noticed going into labor earlier. He found her in a large depression on her back and gasping!

Grabbing a halter from his calving box he put it over her head and gave it a manly pull…no luck. Thinking quickly, in his first responder mode, he pulled the 4-wheeler in front of the upside down heifer and tied the halter shank to the back of his machine. So far, so good.

The rope came tight, but the 4-wheeler, which weighed at least 600 lbs less than the heifer, lifted off its front wheels and came dangerously close to tipping over backwards. Next try, he locked his legs around the handlebars, leaned out over them like a figurehead on a schooner to distribute the load, and gave it the gas! He felt all four wheels grab and the cow move just before the rope broke! Rob fell forward, head first as the spinning machine climbed over him, rolled him up and laid him out flat on his back!

Third time is the charm. Rob found a heavier piece of rope, re-hitched and…voila! He drug the heifer to flatter ground. He dismounted to untie the slipknot from the machine, unfortunately not noticing that the brockle-faced heifer had regained her feet and was coming his way.

She hit him from behind, bounced him off the 4-wheeler and walked him like a foot-log! Then she turned to escape the scene of the crime and pulled the machine over on top of our hapless hero, eventually dragging the whole wreck to a stop.

In retrospect, Rob said she turned out to be a pretty good mother but he was never able to drive his 4-wheeler into any pasture she inhabited without being attacked.

EPILOGUE: The heifer outlived the machine.