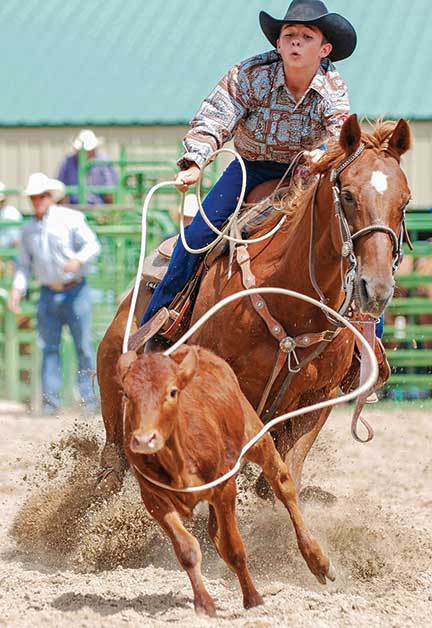 It all started when my wife asked, “What happened to your head?”

“Where?” I asked, thinking I had scratched it in the mesquite or during the night while I was sleeping someone had tattooed “KICK ME” across my forehead. She reached up and touched me above the left ear. “Oh,” I said, “I had a little hair trim.”

“Rollie got a little close, didn’t he?”

“So, that explains the lock of black, tan and gray hair I found in the sink,” she said. “I thought it was off that deer you shot yesterday. Why didn’t you let me do it?”

“Pretty good reason,” she said, “Did you close your eyes while you were trimming your hair? Or did a sudden earth tremor rattle your clippers? Wait, you were working on your trick or treat mask of Frankenstein!”

“Yes,” I said defensively, “it was…it was just the heeler mentality.” That stopped her.

The heeler mentality is a version of the cowboy mentality where instinct often overwhelms good judgment. It can be compared to the team roping “header” mentality. For instance; a header usually has his hair styled rather than cut; a heeler cuts his own hair and always needs a shave. A header drives a fairly new pickup and trailer with a coordinated paint job; the heeler is still buyin’ recaps and the paint job on his trailer matches the primer on his brother’s BBQ grill. A header usually has two horses, his favorite and one in training; the heeler has one horse, in training and for sale. The header has ulcers; the heeler has a hangover.

I’m left-handed so I am condemned to roping the heels. I play the guitar right-handed because my dad made me. So now I can never play music as well as a natural right-hander plus I sign my name upside down because it’s the only way I can write it legibly. People see me signing my name and think it’s a parlor trick. “How long did it take you to learn that?” they ask. It’s like asking a one legged man how long it took him to learn to limp. I’m not doing it on purpose…it’s a handicap! Being left-handed in a right-handed world is like being a bolt with Machine Threads surrounded by nuts all drilled for Standard.
A heeler sees nothing wrong with turning his socks inside out to keep them fresh, storing his dress shirt in his dop kit, and using Scotch tape instead of sewing a new one on when he loses a button off his cuff. It’s not a bad thing having the heeler mentality. Life is easier. You can drop your sandwich on the floor, then pick it up and eat it. What’s a few grains of sand? They think nothing of doing a rectal exam on a cow without a plastic sleeve, getting mud on their new boots, climbing on a bad horse out of obstinance, receiving a D in Algebra, or never balancing their check book. But, we can focus intensely on a project when we need to; like comin’ out of the heeler’s box concentrating on the throw, or makin’ a bank shot off the rail in a game of 8-Ball, or cutting off our nose to spite our face!

So, giving myself a hair trim is not out of character. I can live with it, even though I look like the barber did it with an electric sander and a weed eater. It’ll grow out, just a little slower, that’s all.