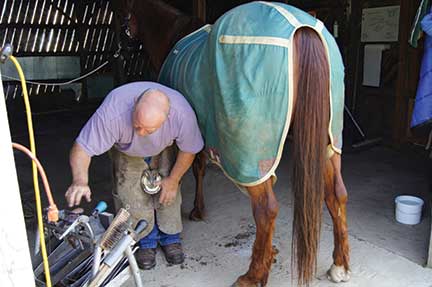 I was asked by the author of Confessions of a Horseshoer* if he could use one of my quotes in his book. I agreed. He sent me a copy. The quote he used was “It’s not that horseshoeing is so hard, it’s just the dread of doing it.”

My first confession: it was not original; a horseshoer said it to me. Alas, I can’t remember who it was so I will simply attribute it to the Anonymous Horseshoer.

My second confession is, I shoe my horse. I don’t shoe other peoples; most can’t afford to have them lame that long!

As I read of Ron’s experience as a horseshoer, my own personal catastrophes kept popping up. He never wears a wedding ring while shoeing. I still tell the story of the newly married Artificial Insemination technician (a type of theriogenologist) from Cedar City, Utah. He ran out of sleeves one afternoon, so finished the last cows “bare-handed.” When he got home he discovered he had lost his shiny, one-of-a-kind, 24 payments, wedding ring! He went back to the farm the next day with a metal detector but never found it. His mother-in-law was vindicated. She had warned her daughter “…Never marry someone whose job you can’t pronounce!”

Confession #3: It was such a good story that I filmed it for my television program. Whilst shooting the B-roll, I lent the film crew my own wedding ring to use as a prop. I’ve never seen it again, except in reruns, atop a cowpie.

I use what I call a “punch” to enlarge the nail holes in the horseshoes. In his book, Ron calls it a “pritchell.” While he was heating his up to reshape the tip with a hammer, the pritchell slipped from his grip. It spun upwards and the sharp, hot end went up his right nostril! He said he could hear it hiss as it cauterized his membranes.

Confession #4: I had a friend who was tightening a hose clamp on a slick pipe and stuck a screwdriver up his nose! I can’t remember if it was a Standard or Phillips head.

Another of Ron’s stories recalled while trimming a cow’s foot was that he restrained her by running a rope from her foot to an overhead rafter in the barn. She objected, kicked out and pulled the roof down on top of him!

Confession #5: In the lifetime process of learning which horses NOT to tie hard-and-fast while shoeing, doctoring or cinching up, I’ve pulled down porches, cyclone fences, t-posts, statues, totem poles, chimneys and signs saying, “Don’t tie your horse here!”

The book was great but Ron never answered the eternal question, “Why do some people become horseshoers?” For myself, I can only explain it by asking, “Why do some dogs chase cars?”
*Confessions of a Horseshoer by Ron Tatum ©2012
University of North Texas Press
www.baxterblack.com