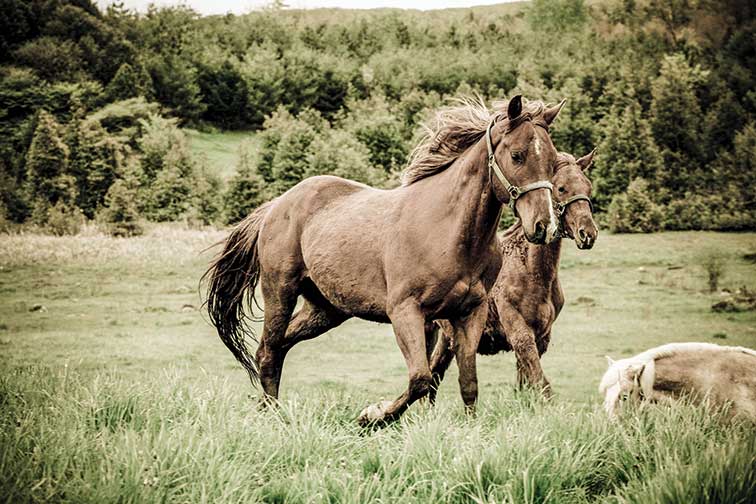 It’s a crisp winter day as I shut down Facebook, turn off my computer and head out the door to do a little face to face time with my stallions. Won’t be long and it will be breeding season again and we will rapidly go from cool and calm to hot and excited while visions of mares dance through stallion heads.

Oh, oh, Commander, my perlino Quarter Horse stallion, looks worried about something. His head is down and he’s leaning against the wire fence mumbling to himself. I’ve learned that when you have a horse that talks, it’s not unusual to find him talking to himself. My husband does that too and as he gets older and harder of hearing he talks to himself louder!

“So Commander, what are you mumbling about?” I ventured to ask. “Hay! Do we have enough hay for the winter?” His blue eyes were genuinely concerned as he trotted up to me. Mares and hay were the two biggest interests of his life! “There’s a hay shortage all over the west and there just might not be any more available till harvest time!”
“So just where did you hear about the hay shortage?” I knew about this and had stocked up, but how did Commander know this?

“It’s all over the internet; all the horses are talking about it.” He calmed down a bit and gave me his most intense blue eyed look. “The stallions down in Texas are really worried; no hay means hungry bellies and fewer mares to breed as no one wants more mouths to feed!”

“Wait, just wait a minute. How can horses get on the internet?” I looked around half expecting to find a computer or Blackberry tucked in a corner. You never know what smart horses can come up with and between my stallions they were constantly surprising me.

Commander gave me another blue eye piercing look. “You humans think you invented the internet but horses have been using the Barbed Wire Internet for years before you caught on and installed it in your little computer boxes. Let me give you a little history lesson, cowgirl.”

Barbed wire was invented in France in about 1860 and then popularized on the western plains of the US through the 1870s. The introduction of barbed wire in the West dramatically reduced the cost of enclosing large areas of land. This led to disputes known as the range wars between free-range ranchers and farmers in the late 19th century. When legal courts settled in favor of the farmers, it became a felony to cut a barbed wire fence to let cattle through to better grazing lands. In short time, nearly all of the open range became fenced in and under private ownership. For this reason, many historians have dated the end of the Old West era of American history to the invention and then proliferation of barbed wire fences.

“About that time, horses found that they could communicate through the wire by nuzzling it and sending messages along the miles of fence to listening horses along the way.” Commander continued. “Then one very smart horse, I’m sure he was a Quarter Horse stallion, figured out a way for the messages to go barbed-wireless. Now we horses communicate with each other all over the country.”

I was stunned! Could this possibly be true? I knew that horses have their own way of talking with each other but this was truly amazing. Unless you have a horse that talks to you, you just don’t know these things!

“But stay tuned, cowgirl, horses have come up with an even better way to communicate! We’ve found that even with all the technical advancements of the Barbed Wire Internet it just can’t take the place of muzzle to muzzle time.” Commander had a soft, dreamy look in his blue eyes now as he said. “All the smart horses have quit spending hours huddled up against a cold, impersonal, electronic barbed wire and instead are spending more time just talking over fences.”

Commander was fondly looking at the mare pasture. “We dumb animals have figured out that true communication is face to face and eye to eye. I wouldn’t want to spend time with a wire when I could be gently nibbling the neck of a mare, sharing breath muzzle to muzzle or even trading stallion horse jokes over the fence with Timer.”

I was mesmerized with some of this horse logic and quietly turned my new iPhone off and slipped it in my back pocket. Then I laid down the iPad that had been under my arm and stacked my Nook that had been under my other arm on top of it. I removed the compact portable computer that was in my purse and set it aside with my earphone. Then I just started petting my great white stallion and he nuzzled me back.